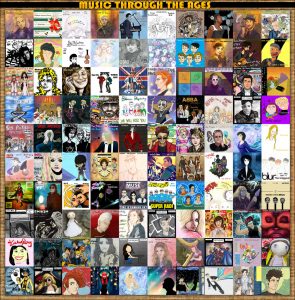 Musicians, being famously open-minded, listen to and draw inspiration from many sources. The music they listen to, however far removed it is from their own style, colours the work they produce. Classical music, though it doesn’t appeal to everyone, shaped the rock and pop music that people enjoy today. Let’s see how music has changed through the ages.

==Medieval==
Between the 9th and 14th centuries, music was mainly religious and bore little resemblance to modern pop music. There was some secular music, mostly sung by travelling minstrels and troubadours in vernacular language rather than the Latin of the church. With the development of musical notation in the 11th century, music could be passed down and evolved.

==Renaissance==
The 15th and 16th centuries brought about a greater demand for secular music, particularly in the form of the madrigal: a two- to eight-voice musical composition usually used to recite a famous poem. The development of the printing press in the Renaissance Period helped in the spread of musical notation, which had previously all been handwritten.

==Baroque==
If the music of previous eras was heavily weighted towards the church, the 1600 to 1750 Baroque Era changed that. Great composers such as J.S. Bach and Vivaldi created music that appealed directly to the heart and was intended to evoke emotion rather than invoke God. The red-headed Antonio Vivaldi had an enigmatic stage presence and was known as “il Prete Rosso” (The Red Priest). He was a predecessor of modern rock personas such as David Bowie’s Ziggy Stardust.

==Classical==
The Classical Period of classical music stretched from 1750 to 1820 and focused chiefly on instrumental music. Great composers of the day included Haydn, Mozart, Emmanuel Bach and Johann Christian Bach (J.S. Bach’s sons). This era introduced musical forms still in common use today, such as the repetitive “chorus”.