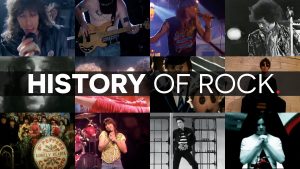 Rock and Roll music has a long history of popularity worldwide. Mixing musical styles like jazz, r&b, gospel and pieces of country music, rock and roll has found a musical style that has become a phenomenon over recent years. You can’t turn on the radio without hearing a popular rock and roll hit. It doesn’t matter whether it is a new release or something from the 1950s, rock music has exhibited a unique ability to withstand the test of time and become the number one, most popular style of music enjoyed by the masses.

Rock and roll music was given its name in the early 1950s in the United States but was quickly recognized worldwide. Rock and roll was used to describe the mixed style of music that usually had a blues drum beat provided by a snare drum, two electric guitars and a bass guitar. This quartet style of playing music in a band was normalized through the popularity of rock music and is still the most prevalent style of musical group today.

The genre of Rock and Roll music includes the pop culture and traditions popular within the time that the music was created. There has consistently been a fashionable way to dress in the rock and roll world. Not only does fashion lend itself to rock and roll but the entirety of pop culture and entertainment is influenced by the traditions of popular rock music.

Seen in movies and used in television, rock music pushed the people who played it into the main stage spotlight. Fame is at the core of rock and roll careers and the musicians have become glorified in pop culture. In recent years, the music industry has grown to include a number of different styles but none is more popular than that of the rock and roll quartet style band.