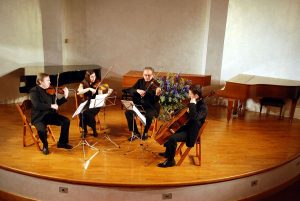 Variety as unity has been used to describe the art of a musical quartet. The combination of tones whether instrumental voices, string instruments or other music makers has a has a massive effect on the way that we think music should sound. The origin of this style dates back centuries and has been engrained in our brains as the most comforting sounds to the human ear.

It has been said that Joseph Haydn was the first person to master the art of writing classic symphonies and sonatas using popular notation. Although Joseph Haydn received much of the credit for conceiving this style of music because of his ability to write sheet music perfectly, there is a lot of evidence to show a history of music notation even before his work was discovered.

Musicians such as Giovanni Battista Sammartini had created works with the same combination of instruments but his music was a different style and did not inspire the continuation of his genre. He did not earn himself the same popularity that Joseph Haydn had received for his work. It has been said that Haydn inspired much of the inflections and tones that Bach used in his musical works. Perhaps, Haydn received credit from reaching a certain level of success. He popularized the unexpected use of silence and sharp changes in tone that can be seen in many of the works that came after him.

Known as the master of the string quartet, Haydn was recorded as writing 68 works in the genre and naming each one of them in the style that symphonies has been named. He was met with disapproval from many contemporary artists when he tried to regulate his structure for writing quartet style music. The contemporary artists were against creating standardized forms of the art and made it difficult for any musician to get proper recognition for their contributions to the industry.